I made this Spicy Cauliflower to serve with a beautiful Wild Salmon Cutlet.  Wild Salmon is so delicious, but its season is very short, so you need to enjoy it whilst you can.  It is also extremely expensive, but worth it for its wonderful flavour and goodness.  (This cutlet was approximately €11 but if you were out and bought a cocktail or a couple of Gin and Tonics it would probably be around the same price, and you would not even question it  –  so to me it was well worth the money.)

I cooked the Salmon Cutlet by dry frying it in a pan, starting off on a high heat and then turning it down to cook through.  You don’t need oil in the pan, as the Salmon is oily and some of the oil comes out during cooking to stop it sticking to the pan.  By putting it into a hot pan, you seal the Cutlet quickly which also stops it sticking.

Here is the recipe for the Spicy Cauliflower  (I based this on a recipe from LittleGreenSpoon but changed it according to what I had in the pantry).  This Paste could be used for lots of different Vegetables.  It would be particularly good with Potatoes which were then roasted in the oven.  You could also use this as a Paste for Meat for the BBQ.

The recipe for Spicy Cauliflower is Dairy and Gluten Free and also Vegan/Vegetarian.

Add all of the Paste ingredients to a NutriBullet (or blender) and blend until smooth.

Place all the Cauliflower florets into a large bowel and mix in the Spicy Paste.

Mix well, so all pieces are covered in the paste. 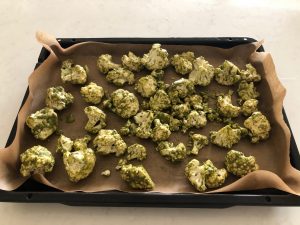 Place a piece of Baking Paper onto a large Baking Tray (this helps big time with the clean up) and put the Spicy Cauliflower onto the tray.

Put in the oven and cook for 20 minutes initially, then take them out and turn them around so the pale sides get to brown up nicely. 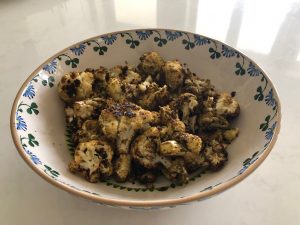 Put back into the oven for another 10 to 15 minutes until they are nicely browned.

(Ovens vary, so times can also vary, keep an eye on them after the first 20 minutes, but you will know how your oven behaves so will have a good idea how much extra time you need).