Whilst we were in Port Fairy over January we ate this dish of Spanish Eggs with Pumpkin for brunch.

I decided to make it for dinner a few nights ago and it got the thumbs up from everyone – my husband actually said it was the best vegetarian meal he has had – he is a committed carnivore!!!

Unfortunately I forgot to take a photo of the dish I made (I am blaming jet lag) so I am showing you the cafe’s version so you get a general idea, but mine looked slightly different. Next time I make it I will put up a photo!! Also I did not measure the spices (sorry) so I am guessing how much I used! 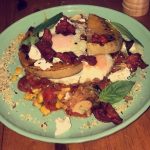 Firstly I made the pepper stew – 1 onion, 2 cloves of garlic and one fresh red chilli, sauted in a little olive oil till softened but not browned. Then I added some ground cumin and some dried chilli flakes (both approx 1 1/2 teaspoons). I let this cook for a few minutes then added three sliced peppers – 2 red and one yellow – and let them cook until softened a little. Next I added one tin of chopped tomatoes and approximately 8 small fresh tomatoes quartered. This I let cook for about 1/2 hour – the fresh tomatoes release quite a lot of liquid so you do not need to add any further liquid, even though initially it looks very thick, once it is cooked it is more stew like in consistency. I then added one drained tin of sweetcorn kernels and continued to cook for another 1/2 hour.

Whilst the stew was cooking through its various stages, I prepared the butternut squash. We have a air fryer so I used this to cook it. I chopped the peeled butternut squash into reasonable sized chunks (not too small) and cooked it in the air fryer in a small knob of coconut oil for 35 minutes where it came out soft inside and nicely brown and crunchy on the outside. (You can easily roast it in the oven but it will take longer – about one hour – so you would prepare this and put in the oven before preparing the pepper stew).

I chopped up one block of feta cheese and prepared my basil for the topping so it was all ready.

Lastly I had to poach the eggs to put on top, which I have never done before so I was a bit apprehensive. However they worked out pretty good considering it was my first attempt and I had to cook 8 eggs.

I put a big wide pan on the heat and brought the water up to boil. Then I let it just simmer. I broke the egg into a cup and carefully slid it into the simmering water. I let it cook whilst I was putting the other ingredients into the bowls.

So to plate up – I used large wide bowls so you could see everything. Firstly put some of the pepper stew, then some pieces of pumpkin, some of the feta cheese and carefully place your poached eggs (or egg) on top. Finally some basil leaves sprinkled over the top. You do need to have everything ready to go so once your eggs are cooked you can put them on straight away.

It really was delicious, the runny egg yolk together with the spicy stew and the crispy butternut squash and the creamy feta all worked very well together.

This fed the five of us with no leftovers!