I know you might groan at the mention of Christmas, but I made my Christmas Pudding during the week as to have a full flavoured Christmas Pudding, it really does need to be made well in advance and left to sit for all those delicious flavours to mature and develop.

I am trying a new recipe this year.   This recipe is based on the Christmas Pudding recipe in Maggie Beers book, Maggie’s Christmas.  I could not get dehydrated cumquats so I used dried Cranberries instead, and I used a really good mild sour dough bread for my fresh breadcrumbs.  The above picture is the pudding about to be steamed for 6 hours !!!

The process starts at least 24 hours before cooking as you need to soak your fruit in the brandy. 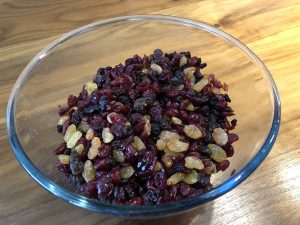 Combine the Dried Fruit in a bowl and mix through the Brandy.  Cover and leave at room temperature for at least 24 hours to allow the brandy to be soaked up by the fruit.  Every now and then, give it a stir.  Try not to nibble on it too much – the brandied fruit is really delicious!!

Once your fruit is ready to go, the making and cooking process begins.

Grease your large pudding bowl with lots of Butter and then Flour the inside, tipping out any excess.

Sift the Flour, Cinnamon, Nutmeg, Ginger and Salt into a large bowl. 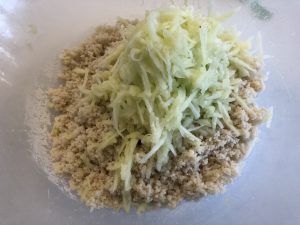 Coursely grate in the Butter, and mix around with the flour.

Whisk the Eggs until they are light and fluffy and mix through the pudding mixture until well combined.

Put mixture into the greased and floured pudding bowl and put on the lid.

I have a steam oven, so I cooked my pudding in that for 6 hours.

If you don’t have a steam oven, you will need a large saucepan filled with boiling water (you want the boiling water to come half way up the bowl) and you will put your pudding bowl into the water, cover and boil it for 6 hours.  You will need to keep an eye on the water level as you must not let it go dry.  When you fill the saucepan over this period, use boiling water to top it up.  If your bowl does not have a lid, make a lid with 2 layers of greaseproof paper (get two  large pieces of greaseproof paper, one on top of the other, make a fold in the middle, then fold back again, so it has a pleat) and secure it around the bowl with string.

After the cooking period, take the pudding out of the water and leave to cool.  Once cooled, replace the greaseproof paper with fresh paper, and leave the pudding in a cool dark place.

On Christmas Day, to reheat it, steam it again as above, for one hour.

We serve our Christmas Pudding with all the trimmings  –  Brandy Butter, Custard, Cream and Ice Cream, so everyone choses what they want to accompany it.