I generally don’t make New Year’s Resolutions as I find that when I used to make them (when I was much younger) they were too general (ie get fit) or I made too many (about 10) and after the initial momentum wore off I had really forgotten what they all were anyway.  So for many years I just did not make any at all and I was very happy with that.

However this year, I have decided to make one New Year’s Resolution.

We had a family meeting in early December (where we discuss as a family things which are annoying us, things we could improve, things we would like to try etc) and my 22 year old son said he thought we were not environmentally friendly enough and that we should really try harder to reduce our waste.  We all agreed that he was right.

Over the Christmas period I started listening to the Podcast, “Mothers of Invention”, hosted by Mary Robinson and Maeve Higgins, which discusses solutions to climate change and climate justice.  Very interesting listening and I would really recommend it.  In one of the episodes, they mentioned Al Gore’s “An Inconvenient Truth”, which I had never watched.  So on New Year’s Day – I was the only one up early – I made my breakfast and watched it.  (Again, if you have not seen it, I would definitely recommend it).  So in light of all these things, my first New Year’s Resolution in years was formed.

And that is to be       MORE ENVIRONMENTALLY CONSCIOUS IN EVERY ASPECT OF MY LIFE !!!

Here are just a few things I am going to try and incorporate into our new eco friendly lives!!!!! 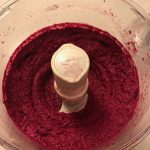 I plan to shop more frequently rather than doing one big shop.  Even with the best of intentions, food does sometimes get wasted.  Plans change and we have a meal out rather than cooking, or three tubs of hummus are opened and none are finished etc.  This brings me to another change I plan to make.  I usually buy tubs of hummus even though it is so easy to make (I know), and I might buy a few different varieties (hence them all being opened) so I have decided I am not buying it anymore, but making it myself.  I made this Roast Beetroot Hummus this morning, (it literally took me 5 minutes although I had already roasted the beetroot the night before) and I will make another variety once this has been finished.  This will save me buying hummus in plastic containers and also reduce our food waste. 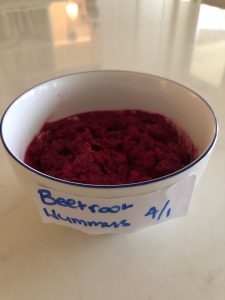 We are also now going to write the date on things we open and put in the fridge, so that we all know how long it has been there.  I find sometimes food does get thrown out, as packages/tins/tubs are opened and no one can remember when they were opened.  So we are keeping a marker in the kitchen to label anything opened so everyone knows.

I have a shopping trolley which I am going to use much more frequently to do my grocery shopping instead of driving to the supermarket (unless it is pouring with rain).  My 17 year old daughter is aghast that I will be seen out and about with it, but I can easily walk to the shops and it will kill two birds with one stone, in that I will not be driving the car, and it will also help with my plan to shop more often so as not to waste any food.  (Good exercise as well –  another bonus)  So if you see someone in Dundrum with this trolley, come and say Hello!!! 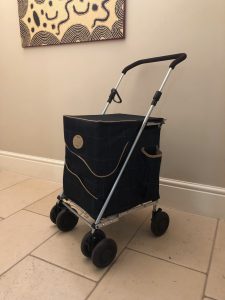 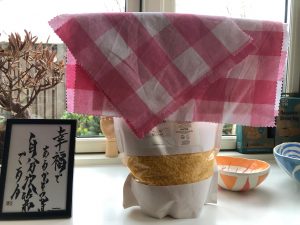 Finally I have been meaning to make my own Beeswax Wrappers for months now and have all the ingredients ready to go.  So in the next month or so I am going to actually experiment with my recipe and try and perfect it.   I will let you know how I get on.